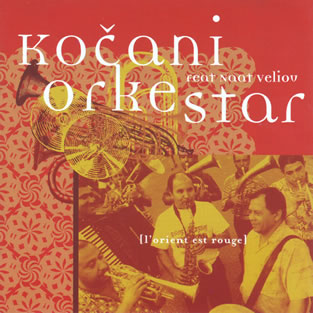 .{square_img} The band’s first album for Crammed (1997), which introduced them to international audiences.

From the original press release:

Kocani Orkestar comes from the city of Kocani, in the new Republic Of Macedonia (ex-Yugoslavia). Performed by two trumpets, three tubas, saxophone, clarinet, zurla (traditional oboe) and percussion, their style of music is aptly described in their region as Romska Orientalna Musika – ‘Rom’ meaning ‘Gypsy’. It is a potent mixture of powerful brass band sounds, Turkish/Bulgarian rhythms (including characteristic asymetrical time signatures such as 7/8, 9/8 etc., which are sometimes called ‘Aksak’ in traditional Turkish music), and Eastern-style solos which are at the same time very skillful, inspired and wild.

The material, which is very creatively arranged by band-leader Naat Veliov, comes from a variety of sources: traditional dance music from Bulgaria, Romania, Serbia, Turkey, elements of rumba and salsa, and even Indian film music. As for this album’s title-track (“The Orient Is Red”), it is based on a famous Communist Chinese song which had apparently achieved pop hit status in Yugoslavia during the Tito era…

A live performance of the Kocani Orkestar is a formidable and exciting experience. We’re confident that a good deal of this excitement is successfully conveyed by this new album, which was recorded in Skopje (Macedonia) by Vincent Kenis, CramWorld resident producer who is also responsible for albums by Zap Mama and Taraf de Haïdouks, and for the Congotronics Series.