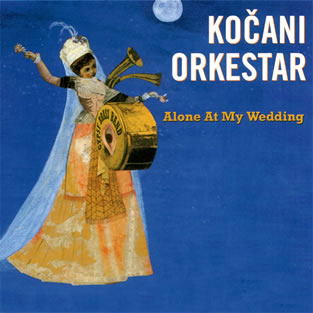 After their adventures alongside the Taraf de Haïdouks (on the acclaimed and awarded “Band Of Gypsies” album), the mighty Macedonian brass band continued to broaden their scope in this exciting album devoted to Gypsy wedding music.

With their expanded line-up, mighty Macedonian brass band Koçani Orkestar are wilder than ever, getting the entire audience up on their feet & dancing at every concert. Their music is still based on Gypsy tunes from various parts of the Balkans and on Turkish/Bulgarian rhythms, with a sprinkle of Latin flavour… but this album is particularly devoted to the repertoire played by Gypsy bands during wedding celebrations in Macedonia. This enables the Koçani Orkestar to transcend the strict boundaries of the brass band genre : half of the tracks showcase the vocal talents of their two new singers (charismatic, young Aljur Azizov and accordionist Zlate Nikolov), and there are several small ensemble pieces featuring instruments such as darbuka, banjo and clarinet. The band’s popular trademark thundering style is present as ever, with its powerful rhythm section (drummer + four tubas) which rocks like a mutant Balkan funk band, and its wailing, passionate soloists (Ismail Saliev on sax, Turan Gaberov on trumpet and Deladin Demirov on clarinet).